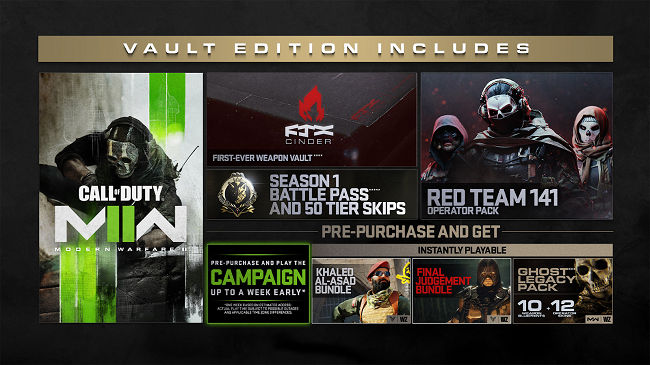 How to get Ghost – Red Team 141 after pre-ordering Call of Duty: Modern Warfare II Vault Edition

Of course, a unique skin for Call of Duty: Mobile isn’t the only benefit one gets with the Vault Edition of Call of Duty: Modern Warfare II. Other benefits include Season 1 Battle Pass and 50 Tier skips, Red Team 141 Operator Pack, Ghost Legacy Pack, and FJX Cinder Weapon Vault. Further, players who pre-order the game will get to play the campaign a week early.

gamingbaaz.com - February 25, 2021 0
While PUBG remains missing in action, home-grown nCore Games is leaving no stone unturned to create a dent in the battle royale genre with Fearless...

2K apparently working on an XCOM Avengers game, and other leaks!...

Apple and Microsoft’s Rivalry Had Cooled; Now It’s Back and Getting...

Diablo Immortal to Sonic Origins: The Biggest Games in June 2022

gamingbaaz.com - June 1, 2022 0
Diablo Immortal, The Quarry, and Sonic Origins are all set to release in June 2022, along with a host of other titles arriving over...

Video: Towards a filmic quality at 30 FPS

PS Plus July Games May Include Crash Bandicoot 4, Arcadegeddon, More