While PUBG Mobile may be banned in India, it still earned a LOT of money. According to a report by Sensor Tower, PUBG Mobile (along with its Chinese localized version, Game for Peace) topped the list for the most revenue generated in 2020. This amounts to about $2.6 billion. The report notes that this includes revenue generated across the Apple App Store and Google Play Store and was an increase of 64.3% from 2019. Another game developed by Tencent, Honor of Kings, generated $2.5 billion this year.

Interestingly, the third spot was taken by Niantic’s Pokemon Go, a game that pretty much required players to travel as much as possible. Something that became quite difficult in 2020 during the Coronavirus pandemic. However, the game rose up to the challenge and added a string of updates to make it playable during quarantines and restrictions. Sensor Tower notes that the game earned $1.2 billion this year, and increase of 31.5% from 2019. Rounding out the top 5 was Coin Master and Roblox, both of which generated close to $1.1 billion. 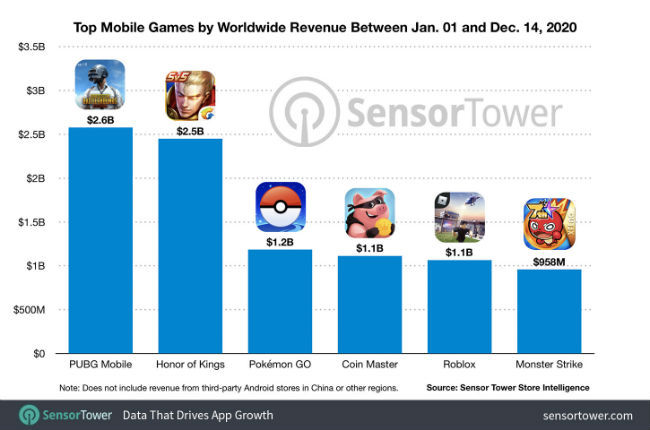 Sensor Tower notes last year three games managed to reach the billion dollar mark in 2019, namely PUBG Mobile, Honor of Kings and Fate/Grand Order. The report notes that this year’s success was due to the global COVID-19 pandemic, which saw many people staying at home. Sensor Tower also notes that as a while, the global mobile games market generated $75.4 billion, which is a 19.5% increase from 2019. Sensor Tower notes that while 2021 may not be able to match 2020 in terms of mobile games revenue growth, it should build upon the year.

Call of Duty: Mobile to add two new weapons in next...

Here’s How Sony Made The PS5’s Packaging Fully Recyclable

China restricts online gaming for under-18 to 3 hours per week to limit addiction...