Splitgate is a next level FPS multiplayer game which uses the mechanics of the popular game series “Portal” and the gun mechanics of the Call of Duty franchise. It involves teams of four except in a few game modes where it has to be teams of three and all of them are set in various different maps. 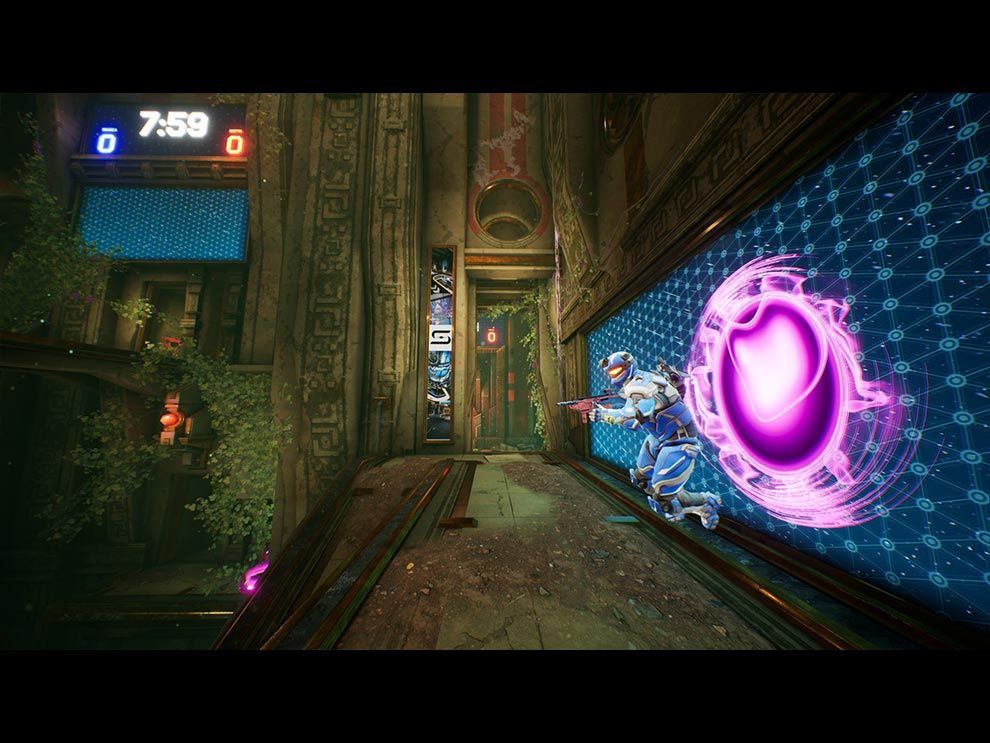 Splitgate is one of those fast paced shooters where you can get 360 no-scoped out of thin air at any given moment. With its big maps and long ranged guns, you can easily score frags. If you can see the enemy on your screen, you can probably kill them. After spending multiple nights playing this game, we can frankly say that the game has great potential in the esports world as an up and coming multiplayer title. The tutorial itself gets you well acquainted with the portal mechanics and shows you all the different circumstances under which you could use the portal mechanics which we would say is a really good way to ease your players into the game and make them learn the game. Every player also has a jetpack incorporated which can be very useful to players having trouble getting used to the portal format(read:us).

Although there are no specific characters in the game which have specific abilities, there’s still plenty of looks to choose from. You can obtain said looks from ‘Drops’ that you get in the game as you level up or move forward in the battlepass. 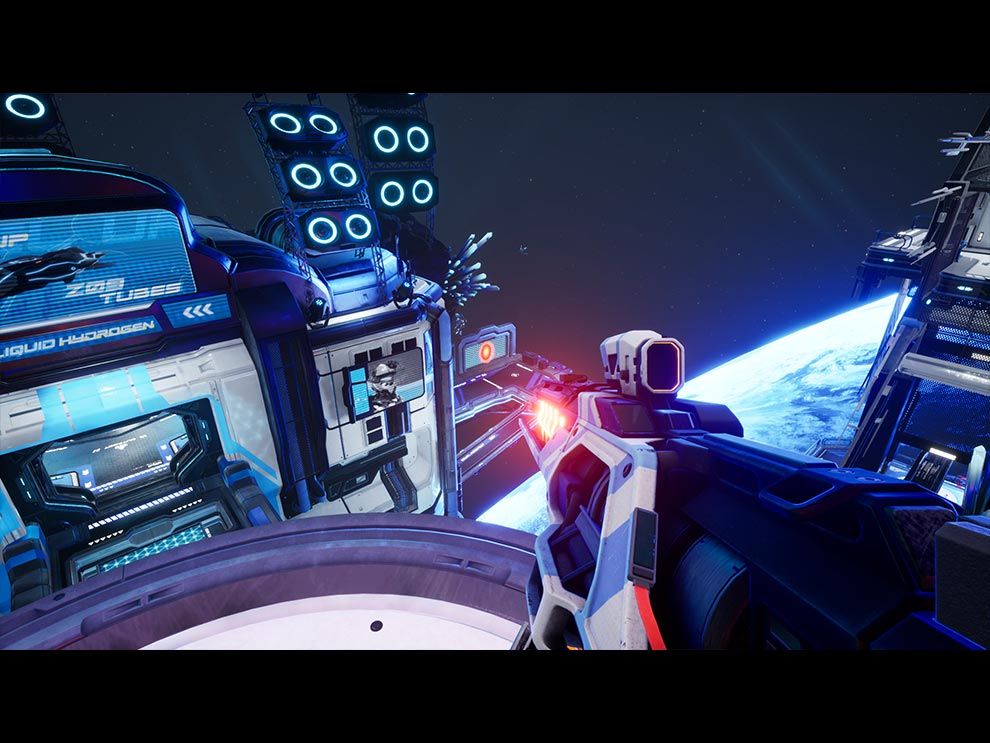 Splitgate gives us tons and tons of maps to play on. There are maps based around various themes such as a forest, a mine, a nightclub, stadiums, and many more! What didn’t feel upto the mark on the maps though was that a few of the maps are a bit too big to traverse through or way too difficult to traverse through. Of course, this is where the portal mechanics come in handy. You can place one side of the portal on one end of the map and open another wherever possible in order to get to that earlier point. You could also use your jetpack to traverse quickly but portals would still be the fastest way to get from one point to another plus it makes for great trickshots and who doesn’t want those sweet sweet clips amirite? 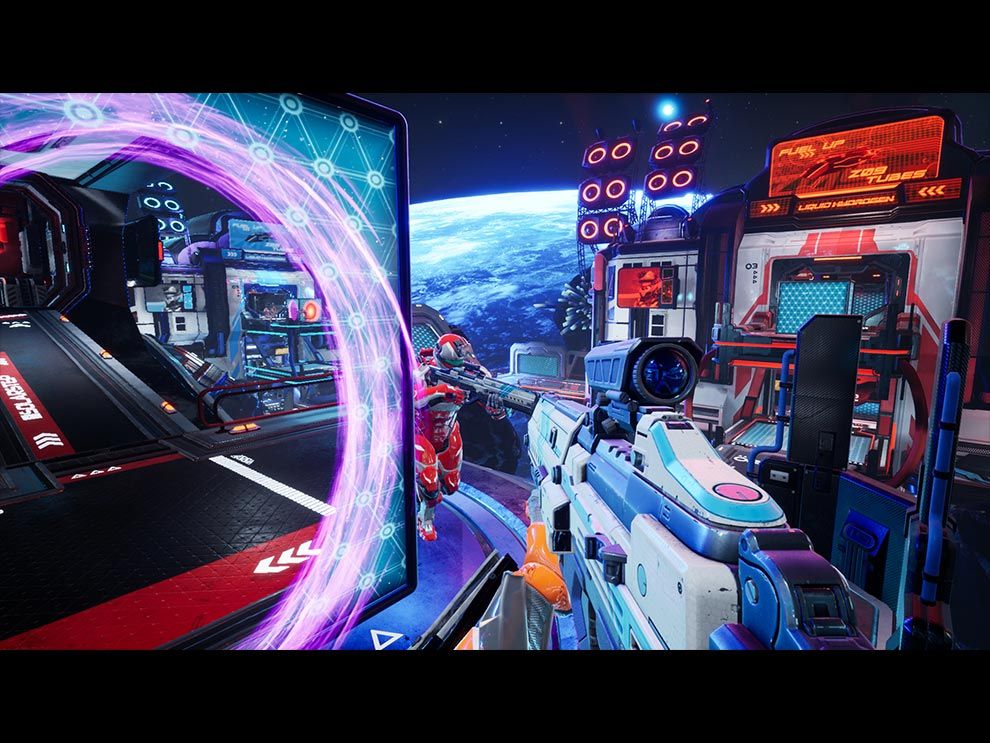 Splitgate provides you with a decent arsenal of multiple weapons. From a gun similar to CS:GO’s Scout, to one like Valorant’s Bulldog which has burst fire. There’s a total of 12 different weapons you can use in the game, each one has a different use and you can go ahead and use any of them but only if you find one to pick up on the map somewhere. Why? Because you can’t decide what guns you spawn with (or we haven’t figured out how to do it yet). Each gun obviously has its own different skins in the game which can be earned through in-game achievements much like CODM in which if you achieve a certain few kills then you unlock a skin for that particular gun which is your trophy to show off to everyone you play with. You can obviously buy skins for the guns as well from the in-game shop using Splitcoins from the shop by either grinding in-game or simply spending cold hard cash on in-game content. The choice is yours to make.

Splitgate brings you all the gamemodes you could ever ask for in its beta itself, which is pretty commendable. From team Deathmatch to Domination, to King of the Hill i.e. Hardpoint, Splitgate has it all. 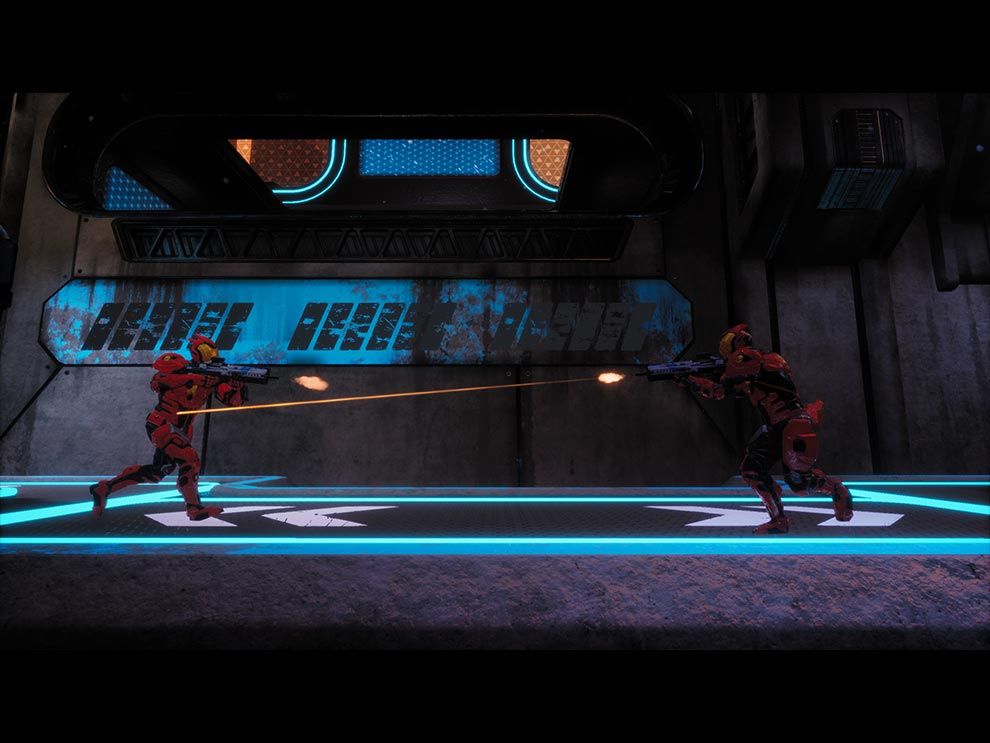 Here’s a list of all the gamemodes that the game currently offers:-

Team Deathmatch: Standard Deathmatch rules apply in Splitgate as well, you simply need to kill people and each kill counts for one point. First team to score 50 kills/points wins.

First team to 600 points or more points before the timer ends wins.

King of the Hill: Similar to Domination, But instead of three points, there’s only one point whose position keeps changing throughout the match with time and the longer you stay inside the point, the more points you get. 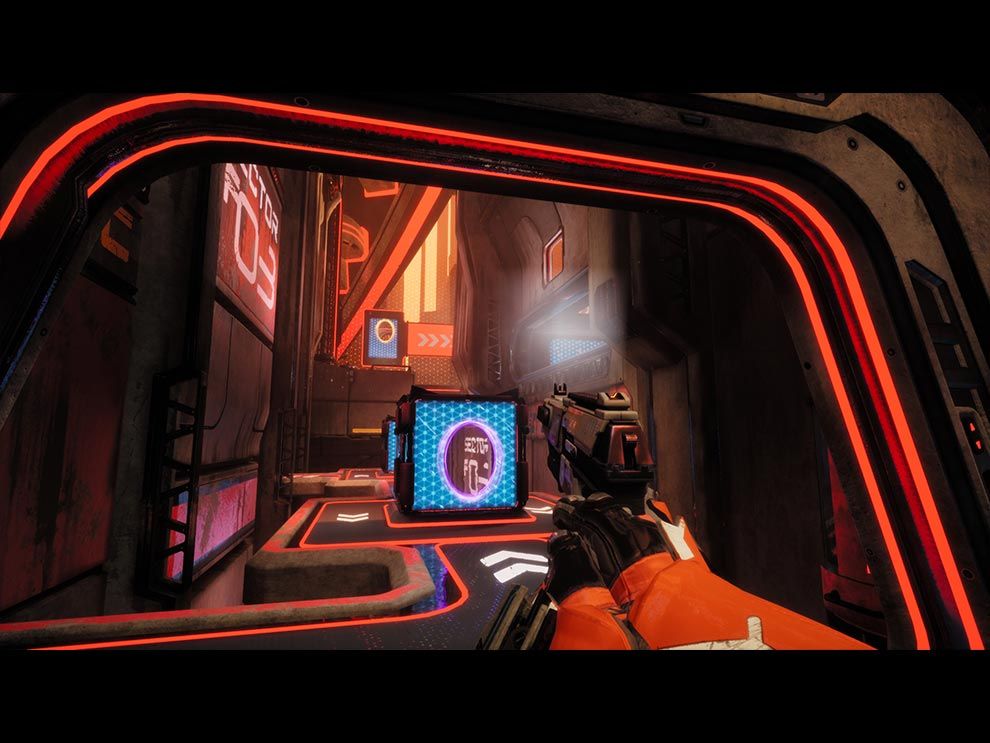 Free For All: 6 Players in the arena, the first one to get 25 kills wins, no teams, no factions, only bloodshed.

Instagib: Similar to Free For All, but the players are only equipped with a railgun which takes time to shoot but is a one shot kill gun.

Team SWAT: Similar to Team Deathmatch in every way except for the fact that headshots grant you immediate kills.

Shotty Snipers: Again, similar to Team Deathmatch in every way except that your arsenal is limited to one Sniper and One shotgun. 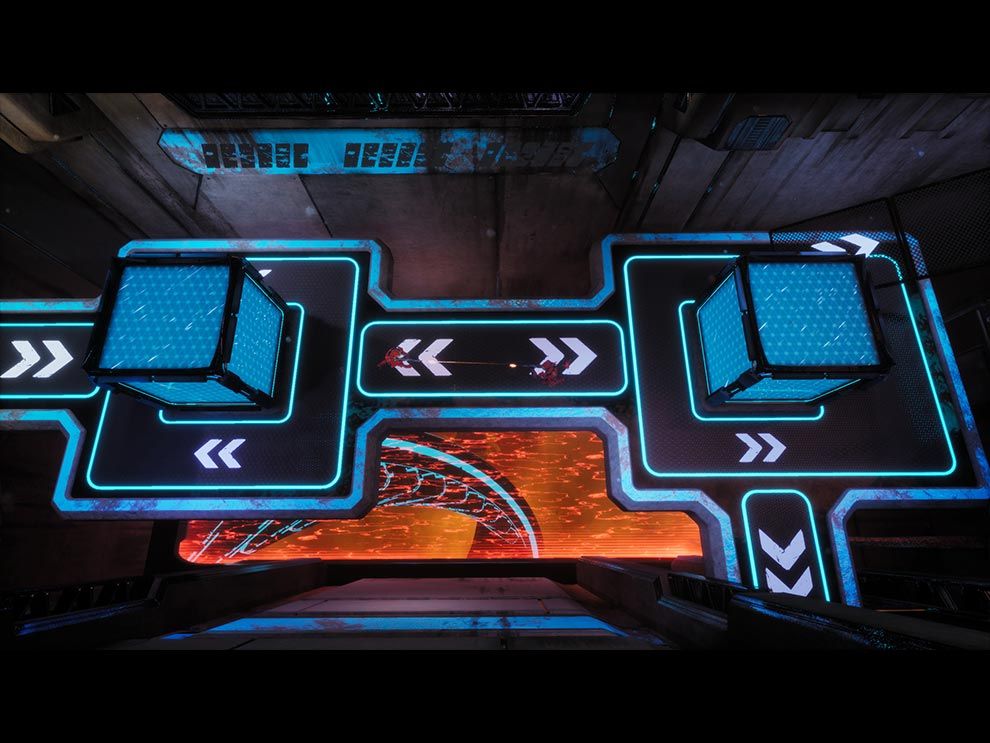 Gun Game: As we’ve always seen Gun-Game go around, here in Splitgate as well, We’ll be seeing 22 kills with 22 different weapons with the bonus that if you kill someone with a melee kill you take away one level from them.

VIP: one member of your team will be the VIP who will have double the regular health and will always be marked on the map for the enemies to see. First team to kill the VIP 10 times or the team with more VIP kills before the time ends wins.

Team Oddball: You run around with a ball in your hands and try to save it from the opponents. The longer they hold it, the more points they get. The player holding the ball cannot shoot but however, they can hit their opponents with a melee strike which instantly kills the opponent.

Showdown: Two 3-man teams spawn with random loadouts and eliminate all of the enemy team. Players won’t respawn until one of the teams gets eliminated completely. Once that happens, the last team standing gets a point. 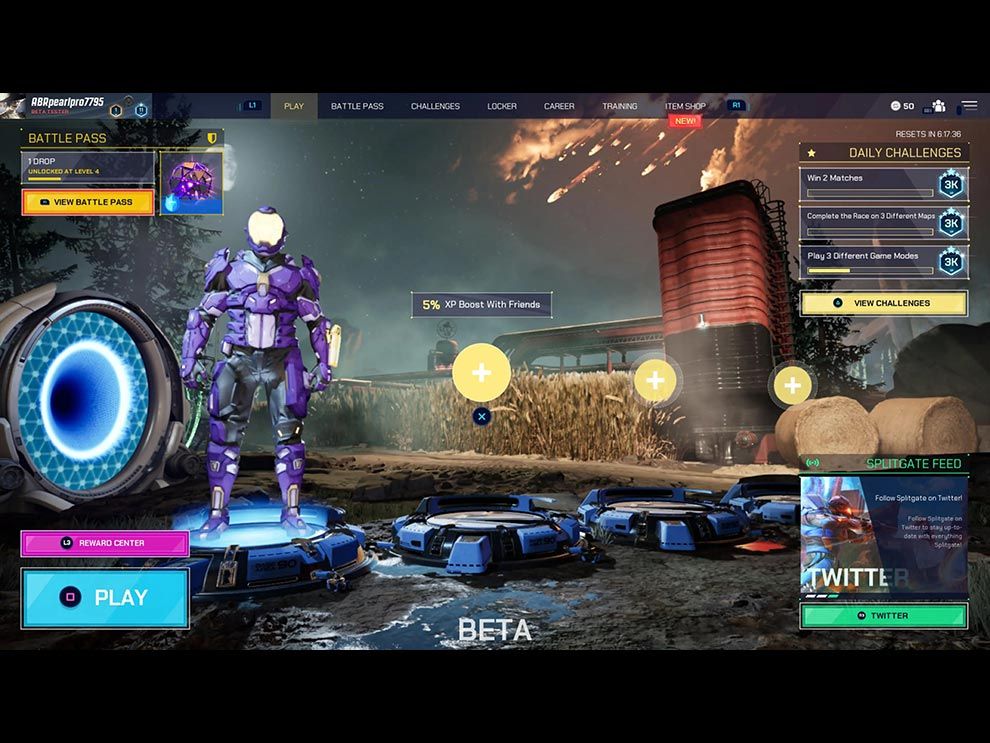 One of the best things we liked about Splitgate is that you can get Splitcoins i.e., the in game currency without actually having to pay for them. You’ll still have to grind for them a bit but it is still possible to get enough Splitcoins to buy a skin bundle or a battlepass in the game without having to spend anything but your time. Just like any other free to play game out there, Splitgate has things you can buy in the game as well through Splitcoins which you can use to buy skins/skin bundles or the battlepass itself which will give you drops or gun skins depending on what the devs include in the battlepass.

Overall, we’d say Splitgate is a game which has great potential in the future and considering the game’s popularity just in it’s indefinite beta, it sure seems like it’s going to be a big part of the gaming industry like Apex Legends or Overwatch.

Animal Crossing Player Recreates The Mario Experience On Their Island

Top 7 best games that make you smarter for iPhone and...

admin - May 26, 2021 0
Valve is apparently developing a handheld console that runs Steam on it, according to a database change. This was spotted by SteamDB developer Pavel Djundik,...

Cyberpunk 2077: Everything You Need to Know Before You Buy It

Wordle: How to Play, Strategies, Tips and Tricks