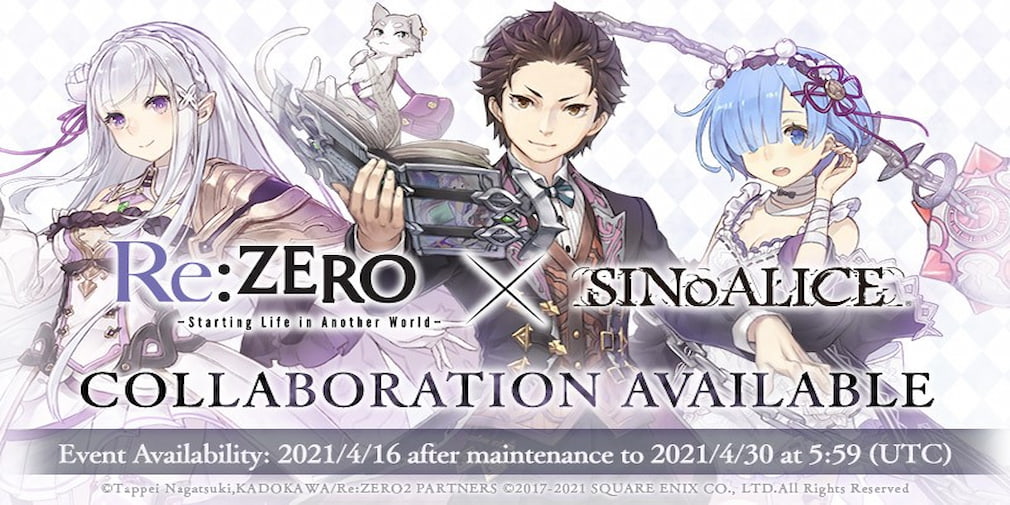 Square Enix’s SINoALICE, the fantasy battle RPG, and popular anime series, Re: ZERO- Starting Life in Another World have jointly announced an exciting collaboration. A lot of new events and content featuring characters from the series can be now be enjoyed in-game. The event is set to run until the 30th of April.

Re: ZERO- Starting Life in Another World is a Japanese anime by Tappei Nagatsuki, where the main protagonist, Subaru Natsuki mysteriously lands up in a different world while on his way back home from a general store.

As the game will be featuring the same storyline as the original anime, players can expect to enjoy to soundtrack from the show too. Players who log in to the game will get a chance to claim Subaru Natsuki/Sorcerer.

As the event will be running until the end of April, the game will be holding a new event and distributing numerous rewards. In addition, the event will also feature exclusive characters in various in-game chapters. Let us take a detailed look at them –

Altogether there will be five steps in the entire event. Each grimoire summons accounts one step. Players who manage to complete all five steps can claim a rare SR weapon.

SINoALICE is available now over on the App Store and SINoALICE” target=”_blank” rel=”noopener noreferrer”>Google Play. It’s a free-to-play game with in-app purchases.

Looking for more excellent RPGs to play on your phone? Here are 25 of the best available for iPhone and iPad

Want more?
Check out our 16 other
SINoALICE news stories!

admin - October 18, 2021 0
Valve plans to remove all games from Steam that use blockchain to exchange cryptocurrencies and non-fungible tokens (NFT) in a move that does raise...

Wolfire Games founder: ‘I had no choice’ but to file Steam...

admin - May 7, 2021 0
Wolfire Games founder David Rosen claims they had "no choice" but to take legal action against Valve after the Steam creator allegedly began interfering with...

Activision teases the addition of Icebreaker map in Call of Duty:...

MacBook Pro Users Are Complaining of Charging Issues With MagSafe 3