When we reviewed the first Total War: Warhammer game we were pretty smitten, and we recall saying that it was a match made in heaven. Two more instalments down the line, that sentiment still stands. While we were certainly wondering what direction Creative Assembly would take with Total War: Warhammer III, what we got was actually a bit of a surprise, and not necessarily in a bad way. With that being said, let’s dive into the review!

Total War: Warhammer III Story – Off to hell we go

The game starts off with the prologue, which not only does a decent job of teaching you the ropes, but also functions as the reason the entire game’s campaign is taking place. As far as Total War: Warhammer, or Total War games in general go, the storytelling in the prologue is some of the best we’ve seen. You’re put in the shoes of the Prince of Kislev, who’s fighting his way to Ursun, the bear God of the Kislev, who has somehow been imprisoned by the daemon Be’lakor. Along the way, the prince is corrupted by Chaos, so when he finally makes it to Ursun, he shoots him with a cursed bullet. Ursun’s deafening cries of pain are powerful enough to open rifts between realities, allowing armies from different planes to cross over into the Realms of Chaos. Here, depending on the faction you’re playing as, your goal may vary. Some wish to free Ursun, others seek to gain more power, either by making a deal with Ursun for his freedom or imprisoning him themselves. Then there’s a few who probably just want to literally consume him. 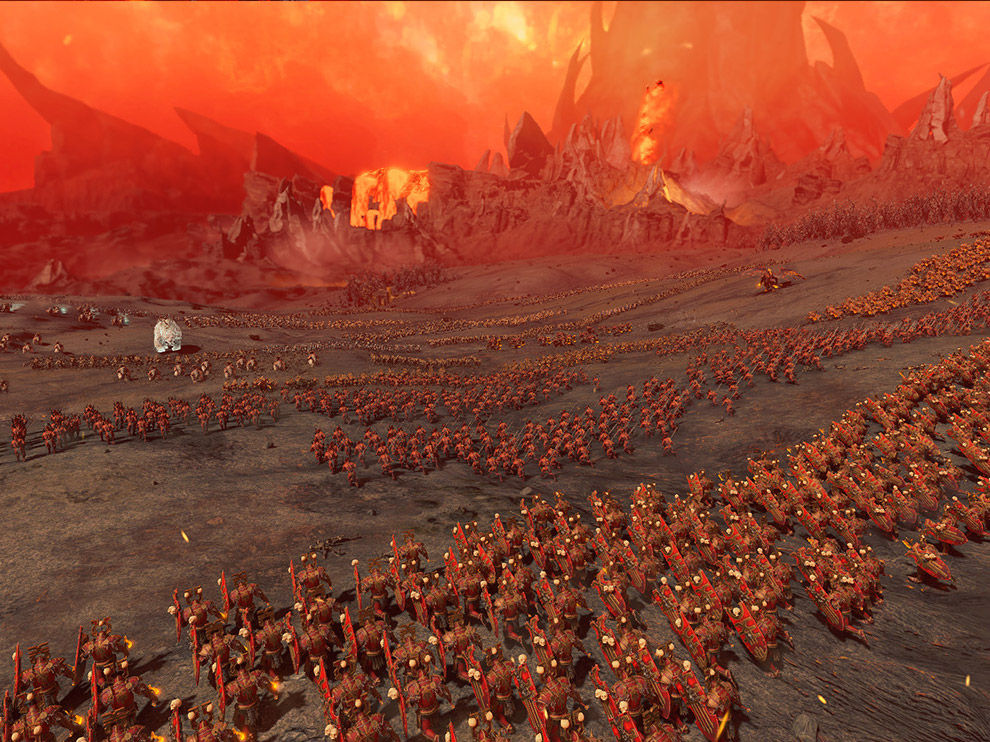 All of this leads to a very unique Total War campaign experience. The priority is no longer the usual conquering of the entire map, but making it to Ursun’s prison before everyone else. Every 30ish or so turns, you have rifts opening up all over the map, spewing out daemon armies, and through these same rifts you can enter the Realms of Chaos. Once through the rift, you will need to test your armies’ mettle against one of the daemon princes. These involve massive survival battles against the armies of daemon princes, and the reward for doing so is the soul of the daemon prince. Collecting four such souls will open up the way to Ursun. 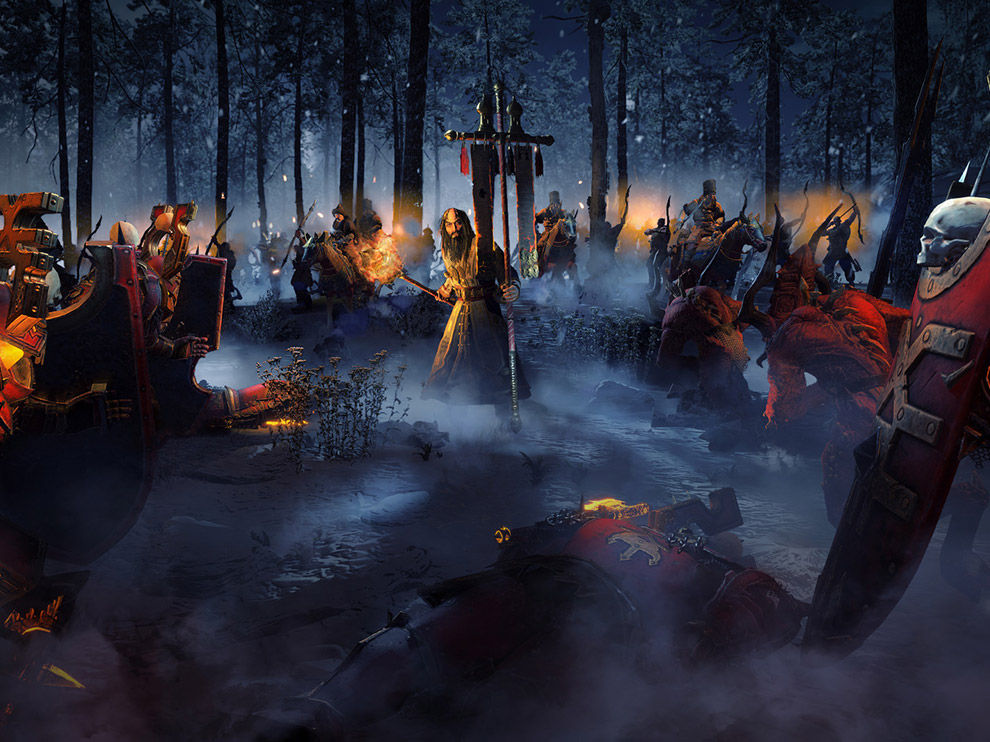 The battlefields in the Realm of Chaos reflect the Daemon prince who rules that particular domain. Slaanesh’s realm is very purple, and the lands are connected by a series of portals. Every step of the way, Slaanesh will tempt you with amazing gifts, at the cost of leaving without what you’ve come for in the first place. Nurgle’s domain on the other hand is rife with pustules of plague, pestilence and toxins. It’s an ugly looking place where your armies suffer under constant attrition. Tzeenth’s realm is a twisted maze of floating islands, and the route to the final battle is random. Khorne has the most straightforward realm, naturally. Kill all the things till you’ve earned enough glory in battle. 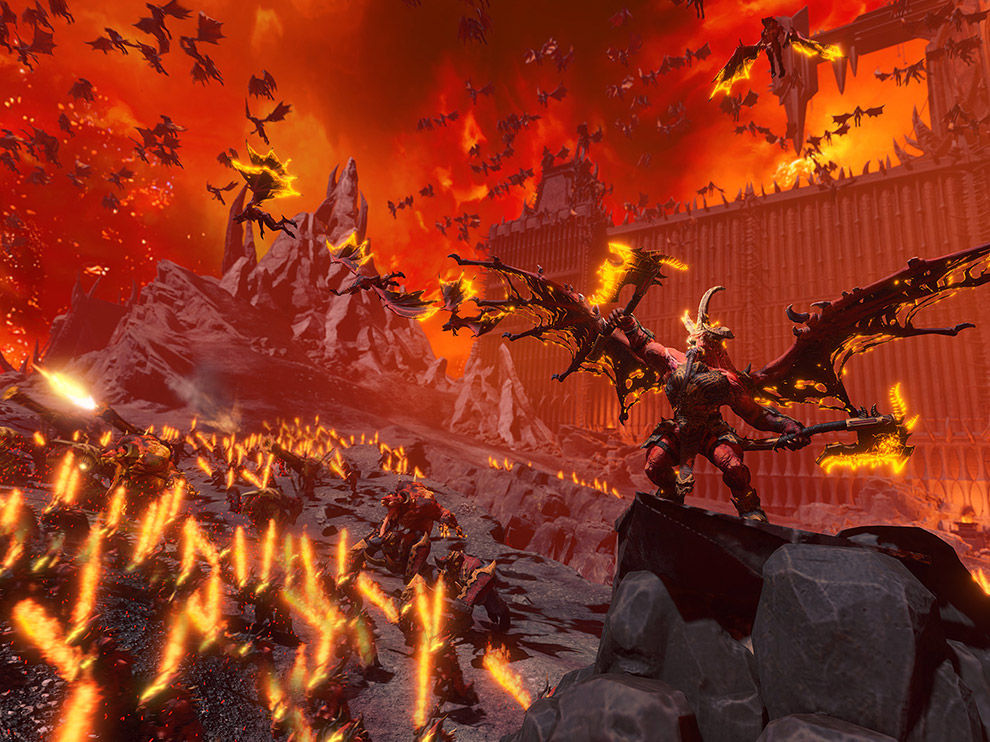 These rifts create a sense of urgency in the campaign. You know there’s going to be a rift opening up soon so you need to rapidly expand and prepare the best army you can, but you also need to keep in mind that while your best army is in the rift, you still need to defend your own territory from the forces of Chaos and other enemy factions. The goal is to be the first to get four souls, so you can choose to strategically let a soul go if you know you’re ahead and focus on your own territory or expansion. However, this also means that when the end is near, you might need to act quickly if another faction is also in the race to claim their fourth soul. 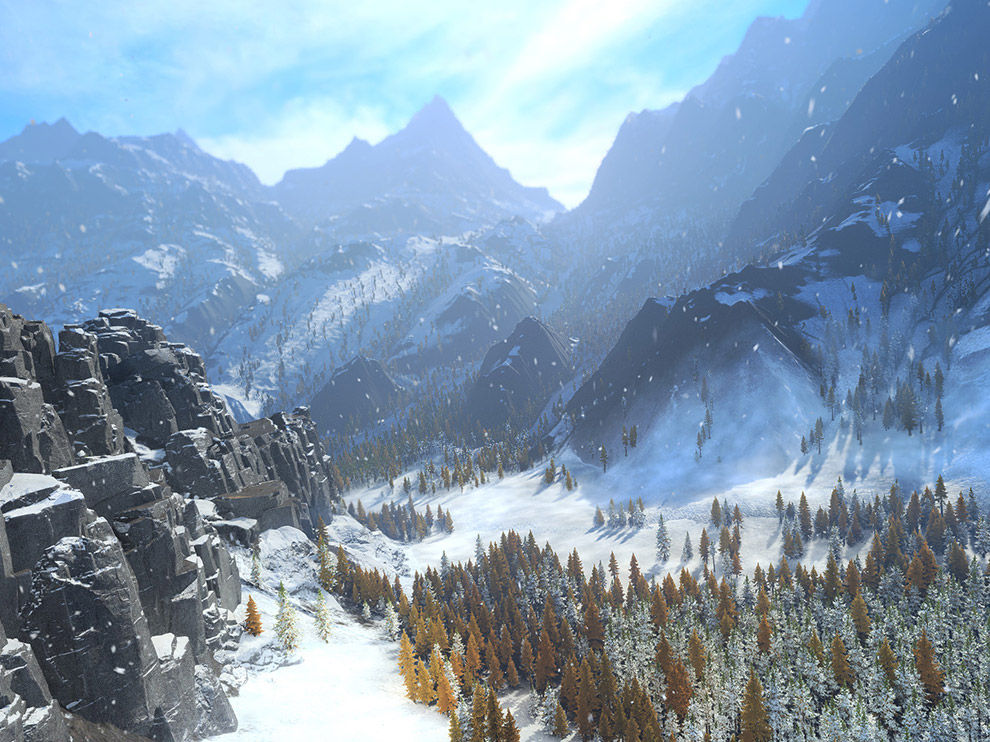 The game still gives you a chance to come back, which is nice. If you were unable to stop an opposing faction from claiming their fourth soul, you need to beeline to Ursun’s prison and defeat the approaching army. Successfully managing to do so will buy you another 15 turns to try and catch up. Of course, this applies to your enemies as well, in case you claim your fourth soul.

We can’t recall any other Total War campaign experience like this one, and it definitely provides for a very interesting and fresh first playthrough. However, after a few runs the novelty did wear off a bit, and we found ourselves enjoying the game’s core sandbox modes better, which was more straightforward. 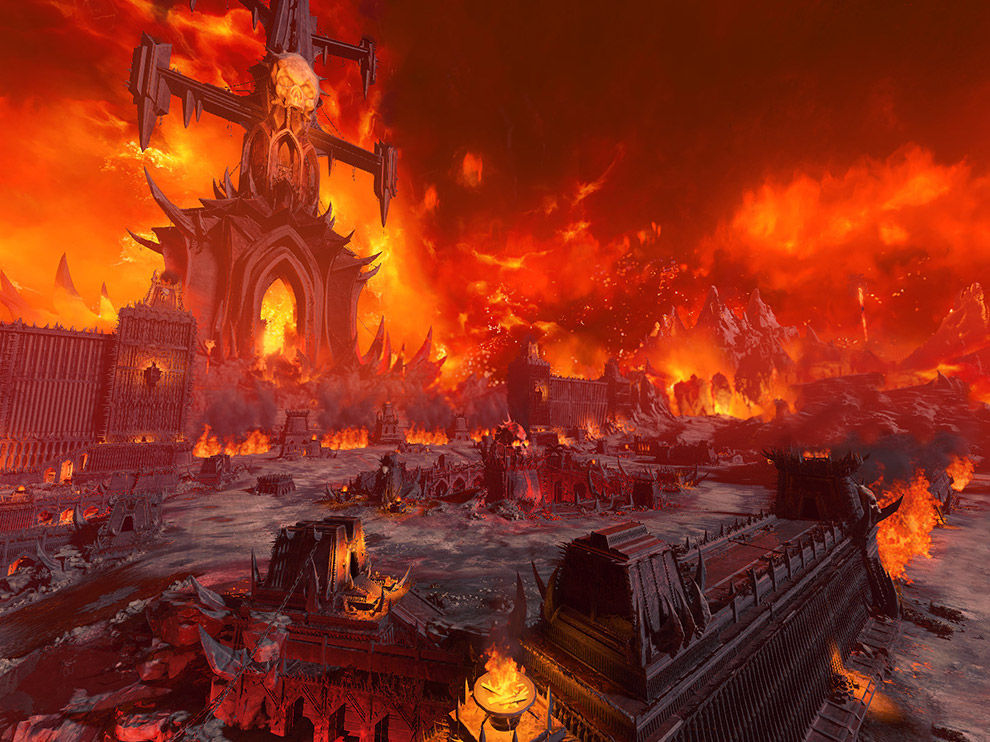 They also added tower defence elements for the final battles of the Rift segments, where you invest resources earned in battle to erect towers and walls and call in reinforcements. However, there are pre decided locations where you can build them, you don’t have a choice when it comes to where they go, and as such, it doesn’t feel like they end up having too much of an impact in the grand scheme of things in the final battles. The idea that one might be able to manipulate Warhammer III’s largest battles with these tower defence structures is nice, but it ultimately ends up doing nothing, especially since we can’t finetune them. Like the main campaign, it’s interesting for the first few runs, but the novelty soon wears off.

Warhammer III has a few new factions for you to explore, including the new Chaos gods’ factions and the Daemons of Chaos faction. Each of the Chaos gods we mentioned above have their own factions led by a powerful representative of the faction, however, the Daemons of Chaos, led by the corrupted Kislev prince, lets you recruit units from all Chaos factions. You also have access to each army’s unique abilities, and the prince himself is customisable. Basically you can replace his limbs with new ones, which you earn by dedicating your victories to specific gods, or even just Chaos in general. There is a surprising amount of variety in the number of limbs and weapons you can equip the prince with, to the point where playing as the Daemons of Chaos is almost like playing a Total War RPG. 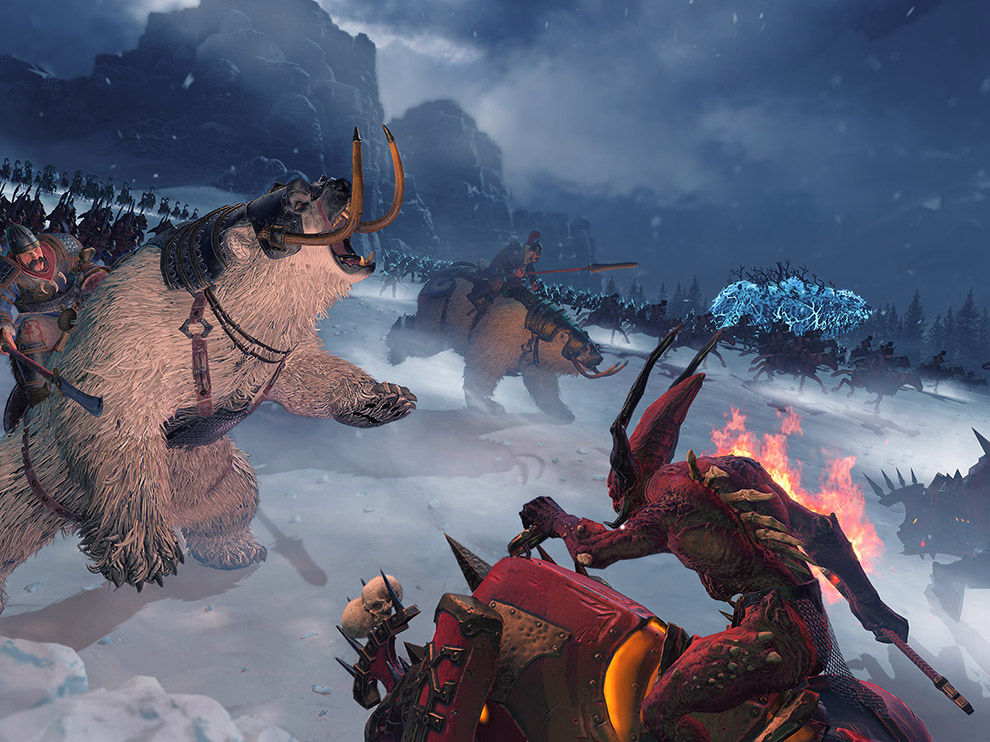 The other Chaos factions, which feel somewhat limited in comparison, still have unique characteristics and traits that help them stand out and affect the map in unique ways. Be it Slaanesh seducing his way into your territory, or Nurgle spreading his plague and corrupting the lands. Of course, all the Chaos factions spread corruption, and it’s visually represented on the map, with the kind of corruption depending on the faction doing the corrupting. 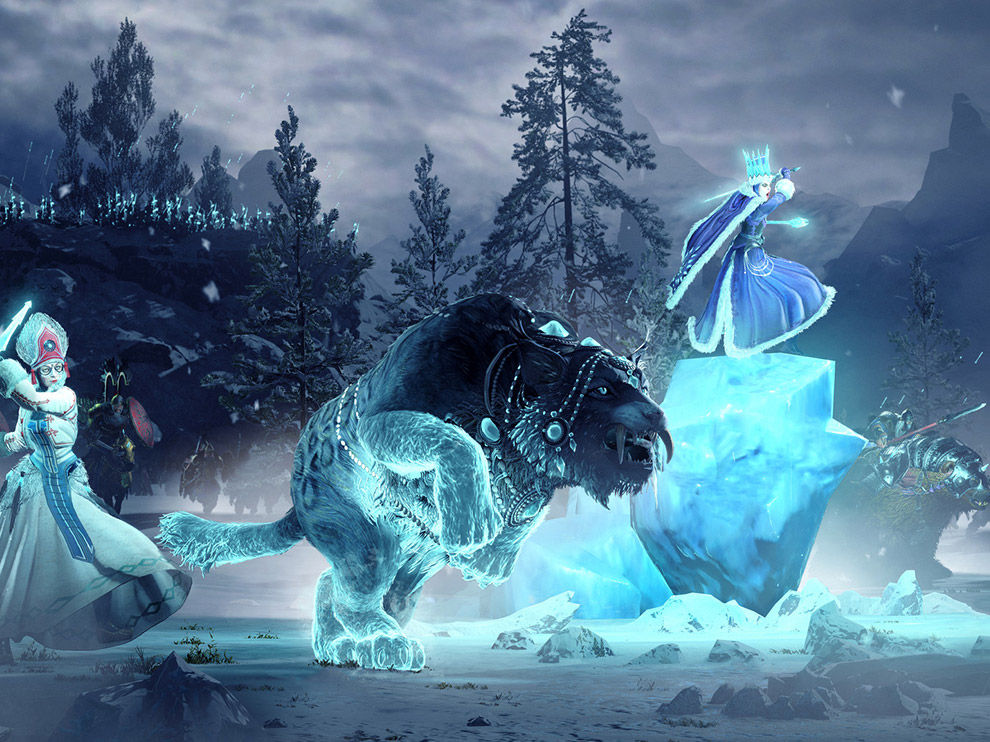 Next, you have the Kislev and Grand Cathay factions. Kislev is all about ice magic and thunder bears. While Grand Cathay’s leaders are literal dragons who can shapeshift in the middle of battle. There’s also the Ogre kingdoms, who are part of the pre-order DLC. They need to manage an additional economy of meat, or they start eating each other. Keep ’em fed and they’re damn powerful. 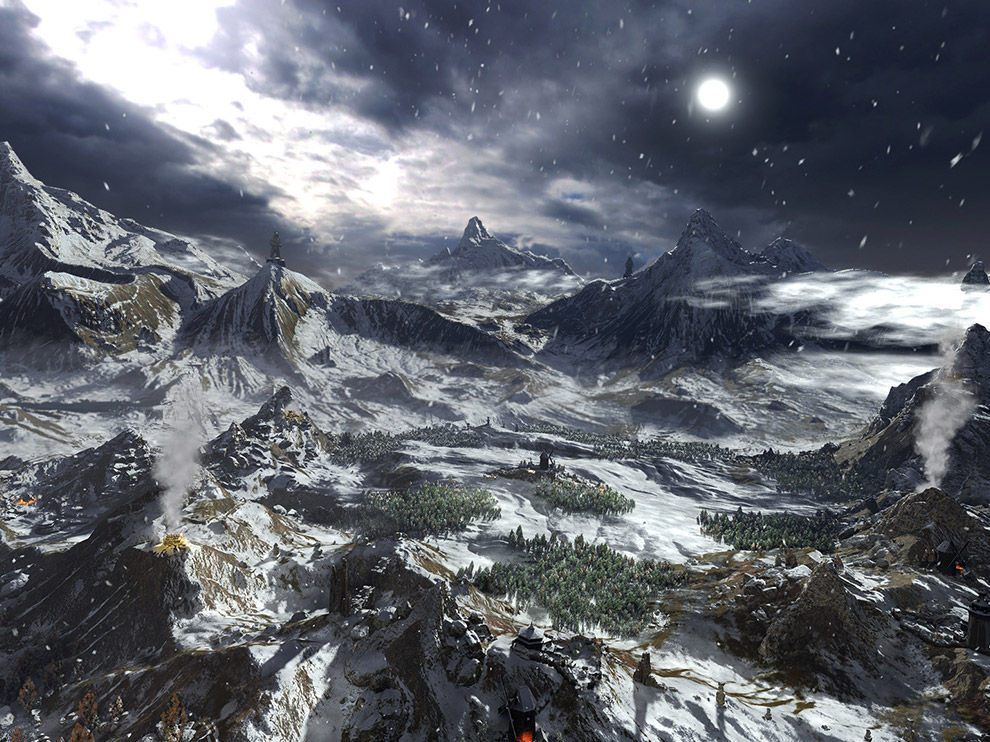 There’s been some QoL changes to diplomacy with Warhammer III, with some features that were introduced in Three Kingdoms making their way to Warhammer. This includes the quick deal option, which allows you to quickly figure out which factions are open to actually dealing with you, instead of going through all of them one by one. Then there’s the outposts; forming an alliance allows you to construct outposts, which allows allies to garrison their troops. This allows for you to recruit troops from allied factions, making for an interesting way round out your army composition. What’s more, troops recruited from allies don’t count towards your own recruitment cap. Thanks to the advantages of diplomacy this time around, you’re encouraged to use diplomacy more often. Reinforcements cost Allegiance, which can be earned by helping allied factions, which is usually by defeating armies of their opposed factions.

You now have simultaneous turns in multiplayer, allowing for players to move and take non-combat actions without needing to wait for other players to finish their turns first. When a player does get into combat, the game pauses for everyone else and they can watch the action unfold. Unless they auto-resolve. Which has also been balanced a bit, so it should work more in your favour most times.

It would seem that the build reviewers played the game on, and the game build that actually released were optimised differently. There have been several complaints about the game’s performance, even on high end rigs. We played the version on the Xbox App, and didn’t encounter too many FPS issues, but we certainly saw plenty of dips and can’t say that the performance was consistent throughout on our AMD RX 6600.

We’ll be honest, Total War games can be confusing, especially for those who’ve never played them before. There’s a lot going on in Total War: Warhammer III, and it can be a bit overwhelming for newcomers, but the tutorial does a decent job of teaching you the ropes. That being said, Total War: Warhammer III is a great conclusion to the trilogy, with the best part being it’s not over yet. The new mega-campaign expansion, Immortal Empires, will merge all three games into one. All the factions from every Warhammer game so far, on a single massive map. If that doesn’t excite you, we don’t know what will.

admin - October 25, 2021 0
Televisions and monitors are often used interchangeably because of their similar hardware, but it isn't often that you come across a product that can...

Call of Duty: Mobile’s Season 4: Spurned and Burned to go...

PUBG Lite Will Not Be Playable Anymore Starting Today, April 29

Google is shutting down Stadia game studio; What does this mean for cloud gaming?...

PS5 Exclusive Returnal Gets New Trailer Ahead Of State Of Play